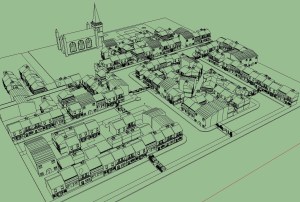 I’m really pleased with how the final map has turned out and i think it all came together really well in the end. So when we broke up for Christmas we arranged for everyone to finish a certain section of the map so everyone got a chance and all the work wasn’t burdened on one person. My job was to design the church and put together the section before the church which can be seen in a previous post. Then when we came back everyone had finished there section so all that was left was to put it all together and this is the final outcome. If we had a little more time we would of liked to add more little details and textures to the map to make it feel more real for example guttering and rubbish in the streets. Another thing that we could of done with more time would be to add different house designs, I do think we have good variation of houses but more would of been better. But as i said earlier i am very happy with how the map turned out.

This is the church i designed for our group project map… 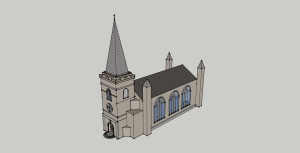 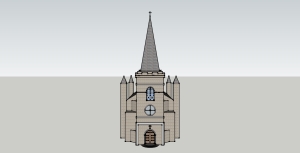 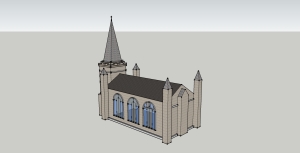 I’m pretty pleased with how it turned out in the end and think it will look good when put onto the map with all the other buildings we created.

Just before the Christmas break we started putting the our map together in SketchUp using the buildings we all created. We took it in turns to build up the map but then realised we wouldn’t finish it so had to delegate tasks for each person to do over the break. This is how far we got before the break… 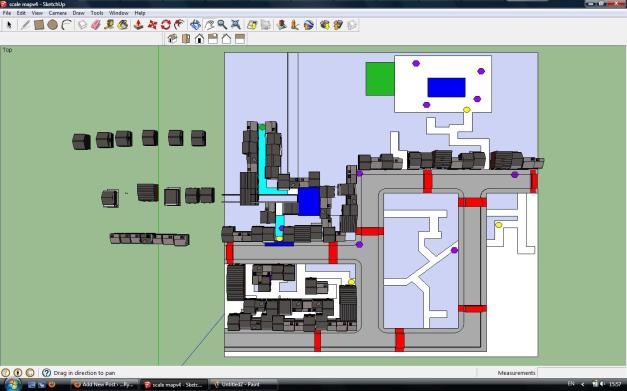 I got given this section to do over the break, i had to create the church and then place some of the buildings for the alleys before the church yard:

So for one of my mini briefs i was asked to create an interactive controller “to bridge the gap between the user and the digital product” and could be for anything that can play a game like a console, tablet, mobile, computer etc. I started thinking about a few idea’s and here are a few i was thinking about doing –

I decided to go with the latter because i wanted to do something similar to the old gun controllers you used to get on older consoles which i loved. And i know the Wii controller is like in the way you point at the screen but i wanted one that could be used to play the more so called hardcore games like call of duty, battlefield, gears of war and many others. I was going for the feel of playing time crisis games and arcade games like house of the dead, this is what i came up with… 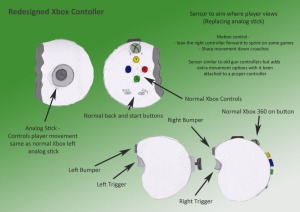 In one of our earlier crafts and media tech lessons Gareth showed us how to draw 3D shape’s on a 2D plane.

The shapes we was drawing was the basic primitives which are the most simple geometric shapes they are spheres, cubes, cylinders, cones, pyramids, donuts, extruded cubes. It’s worth while to learn how to draw these because they are the building blocks for nearly anything else you would want to draw.

This is a level i created in Google Sketchup and i had a racing game in mind so i created it to look like a city and then the player would follow the road and be able to collect power ups along the way. I also added a few different ways the player could go and the harder the root they took the more power ups they could collect. its a technique we was shown in a crafts and media technologies session. 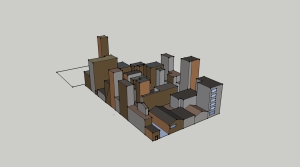 After i had finished the design i started to add detail and textures but it’s no way near completed and i may develop it further in the future if i have the time.

In a craft and media tech lesson Gareth showed us how to create quick and simple concept art using multiple images from the internet. This was my first attempt at it and I’ve done a  first person shooter design similar to games like call of duty or battlefield… 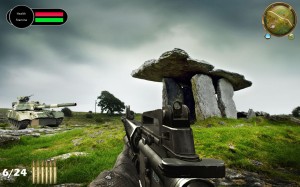 I think its come out okay but i will do more in the future and hopefully improve on what I’ve learned because i think i could do much better.

An independent video game studio in Portland, OR

My world, the people, the places, the technology, the culture, the wars, the weapons, the deaths and births of many characters.

Work, Work and Work some more.

...(was) just a games design student

…Ryan Glover…
Create a free website or blog at WordPress.com.